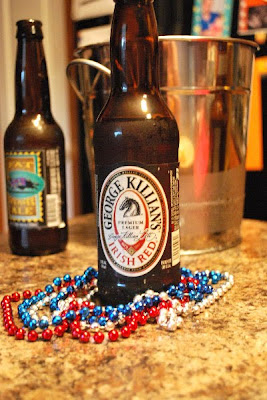 The Qualifying Round for the World Cup of Beers 2010, for the CONCACAF region (North and Central America and Caribbean) is complete.

(Yes, Killian's is a US beer, brewed by Coors in Golden, CO, and NOT an import -- despite most bars cleverly sneaking it onto the "Imports" menu so they can charge more for it.)

And after careful judging by our one-judge panel (that would be me), the winner, which will go through to represent the USA in the World Cup of Beers, is:


Yes, the 3rd place finisher in the 2006 World Cup of Eating and Drinking (behind winner Dos Equis Lager and 2nd place Bass Ale) has won the USA spot in the CONCACAF region for the tournament.

The judges (yes, me) reported that Killian's was slightly "hoppy" (as were all of these, to one degree or another) but had a smoother overall flavor, with a nice warm finish.

Congrats to Killian's for making the Final Sixteen.

Next up: Qualifying for the Mexican, German, and English spots.
Posted by Van Allen Plexico at 5:01 PM