Better (a day) late than never: My overall predictions for the World Cup.

Forget my previous group predictions.... this is going to be full-bore, stream-of-consciousness, too-late-at-night, wide-open guessing! 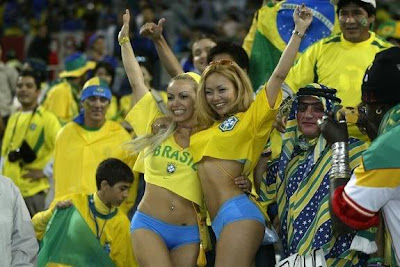 Group A:
1. Mexico
2. France
Notes: This is a tough one to predict, given today's outcomes. It looks like NOBODY wants to win this group. So I'm going with the two most likely in a normal year. I don't think South Africa advances-- they were extremely lucky to get the draw with Mexico-- but it's a real tossup among the other three. I just don't see Uruguay having enough offense to hang with France and Mexico.

Group B:
1. Argentina
2. South Korea
Notes: Argentina gets nine points in spite of its coach. South Korea out-works Nigeria. Greece surprises and gets third ahead of Nigeria.

Group C:
1. England
2. USA
Notes: Assuming the injury situation for the US works out as well as possible, this is the obvious result.

Group D:
1. Germany
2. Serbia
Notes: Germany without Ballack is still Germany. They are a machine. I know Serbia is a trendy pick. I don't care. Sets up an interesting matchup with England, though.

Group E:
1. Netherlands
2. Denmark
Notes: The Dutch should rock and roll. Cameroon has the potential to nab the second spot, but for some reason (history?) I tend to favor the methodical European sides over the athletic but often disorganized African teams. But I'll cheer for the Indomitable Lions.

Group F:
1. Italy
2. Paraguay
Notes: Italy lucks into the easiest group in the field. If they fail to advance-- heck, if they fail to win this group-- it is a scandal.

Group G:
1. Brazil
2. Portugal
Notes: Ivory Coast is a chic pick, but with Drogba injured (even if he plays), I just don't see them getting ahead of either of the two Portuguese-speaking teams in this group.

Group H:
1. Spain
2. Switzerland
Notes: I may be giving the Swiss too much credit and respect, but I remember how solid their defense was in 2006. Can even Spain score on them? Should be interesting.

Mexico over South Korea
England over Serbia
Notes: Congrats on finally getting to the Quarters when not playing at home, Mexico! Now get ready for Rooney and Co.

Netherlands over Paraguay
Brazil over Switzerland
Notes: Once again, as seemingly always, the Dutch must face Brazil. Ouch.

Argentina over France
Germany over USA
Notes: Yet another Argentina-Germany matchup coming. Do the Argentines ever play anyone in Europe other than Germany and England??

Italy over Denmark
Spain over Portugal
Notes: My Azzurri have no business getting to the Quarters, and they'll pay the price with the matchup they're getting-- Espana!

England over Mexico
Brazil over Netherlands
Germany over Argentina
Spain over Italy
Notes: Do you really want to tell me that if Argentina couldn't beat Germany in 2006, with a competent coach, they can beat them this year, with HIM as coach? Right. The Italy game will not be pretty; I suppose the Roja finally exact some revenge for the 1994 quarterfinal loss to the Azzurri.

Brazil over England
Spain over Germany

Pretty pedestrian, I suppose. But the World Cup rarely provides major upsets. It's pretty much a done deal in the later stages.