Jen at Comicon's THE PULSE interviewed me this week about the new SENTINELS editions from Swarm Press: 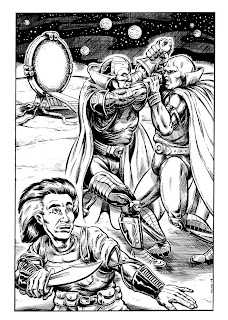 Here's another preview to whet your appetite for the carnage that is to come in SENTINELS (vol. 3): APOCALYPSE RISING!

And is this not awesome??

I asked Chris to show the "Warlord in Red" and the regular (blue) Warlord locked in fierce battle in an alien desert, while Francisco lurks, awaiting the outcome, his dagger at the ready. In the background is the latest machine created by the Warlord-- which can't be good at all for the Earth!

Chris used Rob Davis's recent sketch of the Warlord and Francisco as models for two of the characters, with the Jiminez design of the original Warlord for the other, so you can tell them apart in black & white. A nice touch!
Posted by Van Allen Plexico at 4:31 AM No comments:

Some quick thoughts on HeroesCon 2008:

* The main event: We had a pretty good crowd for the primary thing I flew out there for: the "Avengers Assembled!" panel on Saturday at 3 pm-- especially considering that it started out listed as Friday, then changed to Sunday, and finally ended up on Saturday. The fact that anyone figured out where and when it was held (including me) was a miracle.

I led a general "Avengers" discussion for about a half hour, touching on topics such as Bendis, Iron Man, Secret Invasion, the way almost all of the Marvel line is now one big story, and so on. Then I talked about the ASSEMBLED! book for a few minutes, by which time the HERO Initiative rep had arrived. He talked briefly about what the charity does, and then I presented him with a check for $1,200.00 for the profits the book has earned to date.

Here's a photo of the check presentation: http://plexico.blogspot.com/

FWIW: I ended up stuffing the big check in the trash. After, of course, handing over a real, normal-sized one. :-)

* In other news: The con was okay, but not as good (IMO) as the other two I attended. Seemed like a smaller crowd, and folks didn't much want to spend money (probably trying to save enough to be able to buy gas to drive home!) Guy Davis was right across from me and had a pretty long line all weekend, and indeed it seemed most folks were spending what they had on sketches and art commissions.

* Chuck at ComicsRelated.com interviewed me as part of his daily podcast series from the con.
My episode is here:http://www.comicrelated.com/audio/relatedrecap011.html
I haven't heard it yet, so I'm sure I'll sound ridiculous. Plus, the first take was better, but Chuck discovered halfway through that his high-tech device wasn't recording! So we had to do it over. Oh well!

* I did sell twelve copies of ASSEMBLED!, including eight at my table over the course of the weekend and four more at the panel. Toss in several copies of the other books and it was a decent show-- about a hundred bucks below my last few cons' average, but since this was a comics convention and folks appeared scared off by all the *text* in the books, I guess that's not bad.

Several folks came up to get the copies they already had signed, which was pretty cool. Lavish praise was handed out for all the contributors, so you folks who wrote the chapters should feel... um... lavishly praised! :-)

* I ran into Two Morrows Publishing's Eric Nolen-Weathington, an acquaintance of mine from a few other convention panels over the last few years, and we discussed a couple of interesting ideas I'll keep under wraps for now. We'll see what comes of it.

* Along similar lines-- One guy who came up to my table had a *thick* book he'd done himself-- a comprehensive history of the minor villains of the DC Universe, I think. He gave me a copy. It has tons of illustrations on every page and is like 600 pages long. He wants to publish it but is afraid of getting sued by DC. He was wondering how we managed not to get sued by Marvel. I said: 1) Almost no pics; 2) profits for a comics-related charity, and 3) probably small-beans enough not to attract the wrong kind of notice. Plus it's a general commentary book, and lots of those get published all the time.

I encountered quite a few other folks of both recent and long-time acquaintance, from Chuck at Comics Related to the "Likely Stories" gang to Danielle and a couple of other DragonCon folks, and many more (including a small but growing group of individual folks who seem to run into me at every convention and have read all the Sentinels books so far-- now that is cool!).

My table-neighbors were Kent Archer and his girlfriend; Kent is the inker of DR McNINJA, and he had quite a few fans coming up to get sketches and buy books over the weekend (I picked up a copy myself). They were super-nice-- they'd driven all the way from Boston!-- and it was great having them to talk with.

The one thing I always feel aggravated about at HeroesCon is that I still don't have an actual *comic book* of the Sentinels to sell. Dozens of people came up, looked very excited, flipped open WARLORD, and walked away upon encountering *text*. *sigh* But I'm working on addressing that very situation presently. Yes, a Sentinels comic book may be coming in the next few months. We shall see.

All in all: a decently fun weekend, some okay sales, and lots of friends and acquaintances to chat with. Not too bad a weekend.
Posted by Van Allen Plexico at 6:56 PM No comments: 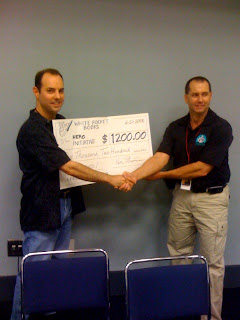 At HeroesCon on Saturday I presented the HERO Initiative charity with a check for $1,200.00, the profits earned thus far by the ASSEMBLED! book I edited, written by the Jarvis Heads of AvengersAssemble.net.

A nice crowd witnessed the handover of the check and I thank all who attended. We should have another check for them sooner or later, from both more ASSEMBLED! sales and from the upcoming ASSEMBLED! 2.
Posted by Van Allen Plexico at 6:24 PM No comments:

Heading out Thursday afternoon for Charlotte and HeroesCon. Hope to see some of you there!
Posted by Van Allen Plexico at 4:35 PM No comments:

Just got word of the location of my table at HeroesCon in Charlotte next weekend: SP-34, otherwise known as table 34 in the Small Press section of "Indie Island." Looks like that's against the wall near the Brevard St. entrance.

If you're coming to HeroesCon, stop by and say hello! I will have copies of the ASSEMBLED! book for sale, along with the new Swarm Press edition of SENTINELS: WHEN STRIKES THE WARLORD (plus James Palmer's VOICES FOR THE CURE and Mark Bousquet's DREAMER'S SYNDROME).

On Saturday at 3 pm, I'll be on an Avengers-themed panel and will present the HERO Initiative with the check from all the money the book has raised in the past year.

Hope to see some of you there!
Posted by Van Allen Plexico at 9:01 PM No comments:

Runnin' with the Chaos Horde

I've been holding off on posting here lately until I regain access to Photoshop, so I could post more of Chris's artwork from the new SENTINELS books. But that still hasn't happened. So I felt I could at least post an update on what I'm working on at the moment.

Right now it's all MARS McCOY AND THE CHAOS HORDE.

I'm hoping to finish the first draft of that one in a couple of months. It's looking like a publisher may be lined up for it, so I really need to knock it out and turn it in. Plus, folks are beginning to clamor for SENTINELS vol 4: THE SHIVA ADVENT. (I don't think "clamor" is too much of an exaggeration, really...)

So: Back here soon with more artwork from the Sentinels books, and then with some preview sections from the Mars book. Stay tuned!!
Posted by Van Allen Plexico at 8:56 AM No comments: