This page will be my permanent and constantly updated list of upcoming appearances at conventions and other events.
Updated June 16, 2021:

I will be a Guest -- and back *in person* again, not online! Yaaay! -- at DRAGONCON 2021.
Labor Day weekend (Sept. 2-6) in Atlanta.
I will also have a table in Comic Artists' Alley the entire weekend, with many of my books available (including the newest ones).
I usually host events, do readings of my work, do interviews of other authors and actors, moderate panels, and/or serve as a panelist for the following tracks:
I will be an online Guest of the SCI FI/FANTASY FEST in Birmingham again this year, on July 31, doing various panels.
https://www.hplscifi.com/

I will be a Guest of Archon, St Louis's premiere SF con, October 1-3, 2021. I will also have a table on Booksellers' Row the entire weekend.
https://archonstl.org/
Posted by Van Allen Plexico at 12:31 PM No comments:

Updated since the last ranking in January of this year.
Note: Still not including James Bond films in this ranking. They are their own thing and I couldn't begin to compare them to these.
Also: I'm close to removing Marvel Cinematic Universe movies as well. Only the Avengers remains in my top 30 anyway, at this point. I love those movies but, like Bond, it's a different experience from other films.
Finally: There's been some movement.
Biggest rise: Kingdom of Heaven. I love it more every time I watch it, and discover something new every time. (Also Star Trek: The Motion Picture continues to rise as I rewatch it and enjoy the score.)
Biggest fall: Babe. I tried to watch Babe again recently and just wasn't into it anymore. Which is sad.
The original cut of Star Wars, restored by "Harmy" as a download, has moved Star Wars back to #1 and it remains there this time around. Fellowship held that spot from about 2002 until 2015.

Here are my current 30 FAVORITE MOVIES: 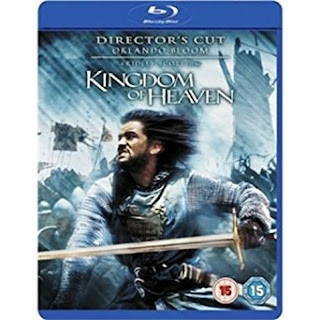 Posted by Van Allen Plexico at 10:15 AM No comments:

While at DragonCon, my Archon STL (Sept 29-Oct 1) programming arrived, and it looks very good:

3 pm: This Story Changed My Life

7 pm: Game of Thrones: The Beginning of the End

10 am: Autographs with Van Allen Plexico and Deborah Millitello

2 pm: Marvel on Netflix: From Daredevil through The Defenders
Posted by Van Allen Plexico at 6:28 AM No comments:

Here is my tentative 2017 schedule of DragonCon panels and events.
I will have a table in Artists Alley this year, and I will be there between the events listed below.
When I'm at a panel, my books will still be available at my table, sold by Brett Brooks and/or Jarrod Alberich.

This was just announced today (Sunday). Very excited for Chris, as well as for me!
Anyone can vote!
--Van

With April’s Windy City Pulp and Paper approaching fast, the ballot for the 2017 Pulp Factory Awards – to be handed out at the conference – has just opened up for voting by the reading public.

The ballot can be found online at http://bit.ly/2lJHFrl

Voters have until Tuesday, March 21 to vote. You may vote in as many of the five categories as you wish, but you are limited to one vote per category. We are again using electronic ballot via Google forms.

Nominees in each category are as follows:

After March 21, the committee will tally all of the electronic votes via http://bit.ly/2lJHFrl
and the winners will be announced at the Windy City Pulp and Paper Convention on April 21, 2017.

Questions and concerns should be directed to PulpAwards@gmail.com. This will insure a more prompt response than reaching out to individual committee members.

Thank you for your interest, and looking forward to your votes!

Posted by Van Allen Plexico at 9:45 AM No comments:

Some of Chris Kohler's Artwork for Sentinels 8: The Dark Crusade


For the consideration of those nominating the 2017 Pulp Factory Awards, here are Chris Kohler's interior illustrations from SENTINELS (vol 8): THE DARK CRUSADE: 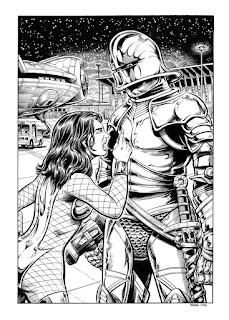 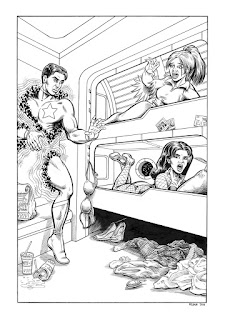 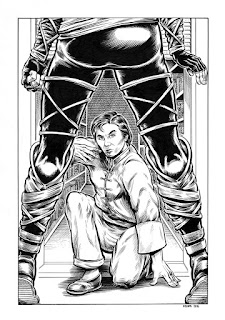 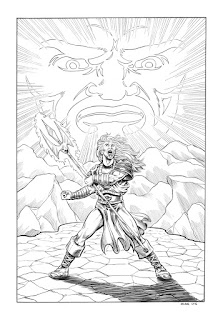 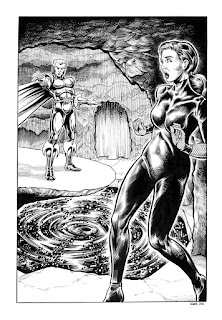 The book is available here:
http://www.whiterocketbooks.com/sentinels


Posted by Van Allen Plexico at 7:10 PM No comments:

Hear my cohosts, guests and me discuss these and other great movies and other pop culture topics on the White Rocket Entertainment Network:
http://whiterocket.podbean.com
Posted by Van Allen Plexico at 3:11 PM No comments: