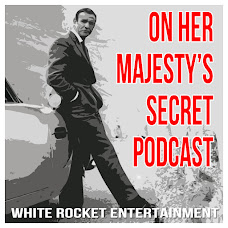 On Her Majesty's Secret Podcast

Ranking the Bonds:
Beginning in 2022, Alan and Van go back through the films and rank each aspect 1-10, including the Villains, the Bond Girls, the Henchmen, the Gadgets, the Vehicles, the music, and much more.

Posted by Van Allen Plexico at 8:05 AM No comments:

A chronological list of all the topics we have covered on the White Rocket Podcast so far (along with affiliated shows: Babylon5Review, OpenWheel, AvengersAssemble, and early episodes of On Her Majesty's Secret Podcast). With direct links for each episode!

My eternal thanks to all of my guests and co-hosts on these episodes.
(Co-hosts in parentheses).

All episodes are available at:
http://whiterocket.podbean.com
www.plexico.net
http://www.whiterocketbooks.com
and the most recent episodes are on iTunes.

JACK OF SHADOWS, reissued by the Chicago Review Press after years out of print, is vintage Roger Zelazny. For many who just read those words, that will be enough. They can stop reading now and go and buy a copy and enjoy--even if, like me, they read it before, quite a while ago, in an earlier release from a different publisher. You guys, go have fun. We’ll chat later. The rest of you, continue on with me to the next paragraph, if you would.

If you're still with me here, then two things must be true: One, you are intrigued enough to want to know more—and I applaud you for it!—but two, simply saying "classic Zelazny book back in print" is not enough to send you racing to the bookstore. You demand more. Very well; I will tell you more about the book, and about how it came to be back before the public.

JACK OF SHADOWS was a Hugo and Locus Awards finalist that originally saw publication in 1971, right about the time Zelazny was also beginning what would become the series he is best known for: the Amber Chronicles. This is important; before we get into why, though, let’s talk a bit about the book, and about our eponymous protagonist.

Jack himself is never fully defined or explained. We learn over time that he is a renowned thief, amoral and immortal; a supernatural creature more at home in darkness than in the light. Oddly enough, his story largely begins with his death, as he is captured and executed while preparing to steal an object of great value. Upon resurrection, Jack vows revenge upon all of those even peripherally involved in his demise. This sets events in motion that ultimately change the very world around him and lead to his moment of hubris. It is then that he confronts himself (quite literally) and faces hard realities about what sort of being he is, and hard choices about what sort he truly wishes to be.

As Jack proceeds on his journey of vengeance (and unintentional self-discovery), we learn about him on the fly, largely through his snappy conversations with those he encounters. We also learn a little—just enough, really—of the strange half-fantasy, half-science fiction world through which he moves. Along with Jack, we encounter strange creatures, arrogant lords, wronged women and bizarre settings, all lushly described in Zelazny’s inimitable style that combines poetic influences and irreverent humor. (No one has ever carried this sort of thing off quite the way he did.)

In this way, the book takes the form of a travelogue, a form at which Zelazny excelled. He was also first and foremost a short story writer, and as such he was a master at including just enough of the information the reader needs to understand a story and be intrigued by it, but not so much as to become distracting or burdensome.

Jack’s amoral, selfish nature is revealed through his dialogue, which is often at odds with his actions. In other words, he talks grandly of the wrongs done to him and of his own altruistic motives, even as he behaves in a consistently and entirely selfish manner. This construction—a main character we are meant to be both sympathetic to and repulsed by, who feels deeply wronged by the actions of people around him who are merely fending off his unwelcome advances of various sorts—represents a clear tie to Jack Vance’s Dying Earth cycle. This connection to Vance is something the author himself acknowledged in his introduction to the earlier editions of the book. Even the protagonist himself is named for that legendary writer.

Also in that original introduction, Zelazny goes to great lengths to argue that JACK OF SHADOWS has little if any connection to the Amber series, either on the surface or in its production. But this is clearly untrue. While many (most?) of Zelazny’s works feature similar themes of immortal beings coping with challenges posed by their contemporaries, the parallels between this book and the early Amber novels run much deeper and broader, and are clearly visible. There are the larger themes, such as the plot turning on just how much the immortal main character changes over the course of his adventures; how the pursuit of power changes a person; the eventual discovery by said character that he doesn’t really desire the thing he began the story thinking he desired most. There are also the more specific echoes of Amber, such as the use of “shadow” as a means of travel; the hero masquerading as a normal contemporary man on Earth (or a version of it); the hero being imprisoned by his arch-foe (in crystal, no less—something that happens to Merlin in the second Amber series), then cleverly escaping and being driven by desire for revenge. If Jack is not a prince of Amber, he certainly would not seem out of place at the family reunion.

That said, Jack himself is fundamentally different from Prince Corwin and his siblings in key ways, and his journey takes a different route and reaches a different destination. Those facts are more than enough to let this book stand on its own, echoes of Amber be damned. (Meanwhile, fans of Corwin and Merlin can be grateful that Zelazny worked out these darker impulses here, upon poor Jack, allowing our two princes to follow somewhat brighter paths.)

Speaking of the book’s introduction, Chicago Review Press has opted to remove Zelazny’s old one—a justifiable move, given that much of what he discusses in it will be of little interest to a reader coming to his work for the first time—and instead procured a new and more retrospective one from SF legend Joe Haldeman. This was an appropriate choice for more than one reason. Haldeman and Zelazny were friends, so the one is ably suited to tell us about the work of the other. Also, Haldeman, like Zelazny, excels at shorter works. He never pads out his books with needless fluff, but instead hones in on the core of the story. (I once asked him on a panel we shared at a convention if his publishers, in this day and age of the giant doorstop novels, ever pressured him to write longer books, and he answered in the affirmative—but he resists.) His introduction is as relatively brief as one of his books, but it has warmth and charm and evokes happy memories of the Roger we all lost.

This is a good time to be republishing Zelazny’s old work, as the twentieth anniversary of his death passed by only last summer, complete with a memorial ceremony in Santa Fe and panels about his work at various conventions (more than one of them proposed by and moderated by myself). Additionally, NESFA recently unleashed upon us a massive, six-volume collection containing virtually all of his short work, among quite a bit of other material. In addition, his younger son, Trent, is now coming into his own as a talented professional writer, bringing more attention onto the family name and business.

Zelazny’s short stories and novels were brought into print by quite a variety of publishers over the years, and the legal rights to them seem on the surface quite complex. Chicago Review Press—an independent publisher in operation since 1973—stepped in earlier and acquired A NIGHT IN THE LONESOME OCTOBER, which they previously released and which has done well. They have now chosen to bring us JACK OF SHADOWS because they perceived greater demand for it than others they might have sought, and because it had been out of print for so long. At present they do not plan to bring us more of his work, but they admit “that could soon change.”

We hope they are right, and that it does. As they publish some sixty titles a year, we’d like to think they might fit a little more Zelazny into their upcoming portfolio. In particular, TODAY WE CHOOSE FACES and BRIDGE OF ASHES have been out of print for about as long, if not longer, and were both published by the same company (Signet) that last brought us JACK OF SHADOWS. The thought that whole generations of science fiction and fantasy readers could come of age never experiencing Zelazny’s work is a fate worse than anything that befalls even poor ShadowJack himself.

Van Allen Plexico is the multi-award-winning author of more than a dozen novels, including the heavily-Zelazny-inspired LUCIAN: DARK GOD’S HOMECOMING and BARANAK: STORMING THE GATES, both of which straddle the same line between SF and Fantasy that Zelazny loved to blur. His Military Space Opera, LEGION III: KINGS OF OBLIVION, won the 2015 Pulp Factory Award for Novel of the Year. He hosts the White Rocket Podcast and serves as Associate Professor of History and Political Science at Southwestern Illinois College. He owns an entire bookcase of various editions of nearly all of Zelazny’s work.

Posted by Van Allen Plexico at 11:49 AM No comments: