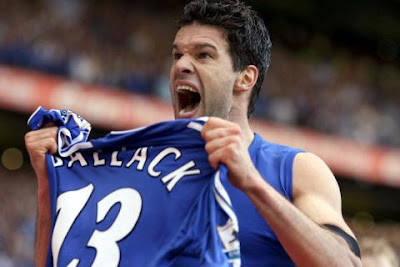 I know one or two key things about each of these sides. Allow me to expand upon that:

Germany has lost their Captain (and my Chelsea jersey guy) Michael Ballack, but they remain a very formidable force.

Australia did very well in 2006 but are allegedly not quite up to the same level as the team that very nearly made the Quarterfinals that year.

Ghana could have been a surprise team in the field, but the injury to (yet another Chelsea star) Michael Essien may have irreparably set them back.

And Serbia is a complete mystery to me-- but that is the one key thing I do know about them: that I don't know anything about them.

Some experts are predicting that Serbia will roar forward and swipe the second (or even first!) spot in the group. Maybe so. The Eastern European teams are so hard to predict.

So I will make today's column short and sweet:

Germany will still prevail in the group. Ghana without Essien will lose all three matches. Serbia and Australia will fight it out for the second spot, with Serbia prevailing. There you go, short and sweet.

Hey, you want deeper analysis, go elsewhere. After all, as soon as I'm done predicting all the groups, this column will be back to talking about what food and beer I'm consuming while watching the Cup, and what restaurants and bars I'm doing that at-- and you all know that's the real reason you read this column, anyway! :-)

It is, after all, officially called "Countdown to Van's World Cup of Eating and Drinking."