Today: A quick look at some of the more... dubious.... fashion choices of US Soccer over the last few years, in our AWAY jerseys.

Honestly, the last really good US jersey in my opinion was the 1998 US jersey for qualifying (but then discarded by US Soccer for the actual World Cup!). I bought that one (retail!!) and it's still the only US jersey I own. I will buy a new one when they produce a new one worth buying (though I admit the current home jersey, white with the faint gray "sash," is probably the least offensive since 1998). 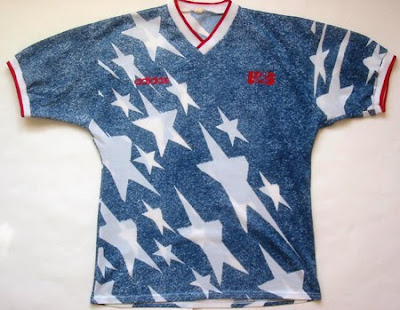 First up is the 1994 away jersey from the World Cup. US Soccer told Nike to "Wr 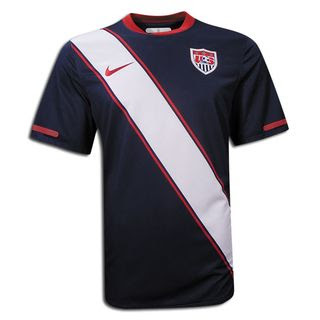 ap the boys in the flag," and Nike complied. It has a sort of denim look, but was not denim. The "home" jersey that year was an even-more-hideous white shirt with lots of thin red vertical stripes. Eeeek.

Next is the 2010 US away jersey for the World Cup. You're about to see a lot of this one, as the US will probably be the "away" team when we open on June 12 against England. I think it's only marginally better than the denim stars deal from '94.

Posted by Van Allen Plexico at 5:58 AM

The faux-denim look from 94 remains my least favorite.

I just wish they'd settle on one classic design and leave it alone.

Some kits you don't mess with: Brazil, Argentina, Spain, Italy...

As soon as we pick one and stick with it I'll buy one.

I found your blog looking for some information about usa soccer jersey and your blog is great!!!

US election: Donald Trump open to talks with North Korea Republican presidential candidate Donald Trump says he is willing to meet the North Korean leader to replica omega discuss Pyongyang's nuclear programme."I would speak to him, I would have no problem speaking to him," the businessman said of Kim Jong-un.The proposed meeting would mark a significant change of US policy towards thpolitically isolated regime.Democrat front-runner Hillary Clinton responded bdecrying his "bizarre fascination with foreign strongmen".The statement, from onof her aides, added replica watches uk that Mr Trump's foreign policy "made no sense".In a separate development, the BBC has learned that Mr Trump could visit the UK before the presidential election in November.Diplomats expect his visit to the UK could happen after he formally becomes the Republican party replica rolex candidate at a convntion in July.On Tuesday he released financial records claiming he holds $10 billion (￡6.9 billion) in assets, although he has so far resisted calls from Democrats to release his full.