Group F: FORZA ITALIA!! and some other guys

Group F features my other favorite squad in international play: the Azzurri of Italia.

And rarely in World Cup history can I recall the Azzurri coming into the tourney with less hype and fewer predictions of glory.

I mean, these are the defending champions! Surely they have a shot, right? 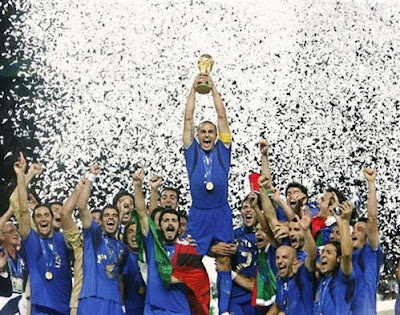 Ehh, probably not. They're an aging side with a very noticeable dropoff in output from almost every angle.

But compared to the other three teams in their group, Italy represents the cream of the crop and should easily advance to the second round.

The funny thing about that: In most previous World Cups, Italy struggled to get out of their group (the infamous loss to Ireland in '94 and draws to Mexico in '94 and to the USA in 2006 come instantly to mind) but then tended to play well in the knockout stages (making it all the way to PKs against Brazil in 1994 and winning it all in 2006).

This time we may see the opposite-- Italy dominating group play but then crashing out.

The other countries in Group F are at least eyebrow-raising, if not intimidating.

Paraguay has a reputation, similar to recent Switzerland sides, of playing really tenacious defense and wringing out 0-0 results against more talented teams. (Consider that in 1998 their most feared offensive weapon was their goalkeeper! I kid you not-- he would run the length of the field to take free kicks, then scamper frantically back to his goal. Crazy!)

Slovakia has a couple of good players but this is their first World Cup appearance and you have to think they won't go far.

And then there's New Zealand. What, are you kidding? New Zealand, land of hobbits and rugby players, made it to the World Cup? That's impressive, sure. But the most likely result for the hairy-footed Shire-dwellers will be serving up nine points for their three group foes. Better call up Gandalf, Kiwis...

I think you're spot on. Italy may be in the easiest group of all the seeded teams.