So we come at last to the "Final Four" of our World Cup of Beer: The Semifinals!

What a tough competition we had among these final four. The cream of the crop had indeed risen to the top, to mix metaphors slightly, and (with the possible exception of Foster's) we had some great beers going head-to-head.

Australia (Foster's) put up a tough fight, but in the end, England's Newcastle, with its smooth, rich flavor (flavour?), was simply too much for the Aussies to handle. Foster's, as it turns out, is also Australian for "Lost to the Geordies!" (I think that's what they're called. Neil?)

The Netherlands' Heineken was the other lighter-colored, weaker-flavored lager/pilsner type to make it this far. It and Foster's were clearly the class of that category this year. But it simply proved no contest against the mighty United States entry, straight outta Golden, Colorado-- Killian's Irish Red.

Killian's triumphed with its smooth, rich flavor that lacked the rough hops kick that the others suffered from. Heineken would be our third-place beer, yes-- but the second Semifinalist was Killian's!

And so, in the end, we had two medium-dark beers facing off in a competition that had, for some reason, seemed to favor the darker beers. (Even Brazil's dreaded Xingu Black Beer made the Quarters!)

But Killian's was simply better. 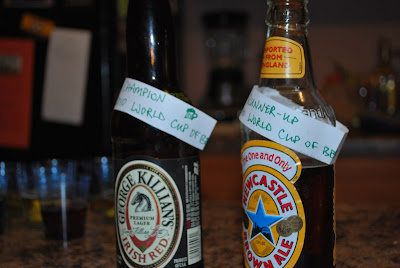 Thanks to Ami for the photography (and for the little sashes for the bottles)!