Following group play, we move into the Quarterfinals brackets for the World Cup of Beer, with single-elimination play beginning. 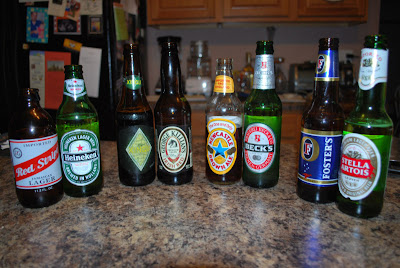 Just as with the soccer World Cup, the winner of each group faces a second-place competitor from a different group-- thus making it impossible for two contestants from the same group to face one another prior to the Finals.

We find the competitors lined up thusly:

The Competition Results:
Match 1: Australia (Foster's) was an extremely weak group winner, facing the easiest competition of any group winner. And they were lucky again in the Quarterfinals, this time meeting one of the weaker second-place beers in Belgium's Stella Artois. Foster's prevailed, sending Australia on into the Semifinals.
Match 2: The always-exciting matchup of England and Germany gave us Newcastle Brown Ale against Beck's, the surprise qualifier from German national competition. Beck's, which had shocked many by making it even this far (securing second place in their group by ousting Italy's beloved Peroni!), gave favored Newcastle a surprisingly tough game; in some ways, Beck's was one of the major surprises of this entire competition. Ultimately, however, Newcastle pulled out the victory and England made the Semis.
Match 3: Brazil (Xingu Black Beer) was another entry that did better than expected. By far the darkest and heaviest of the beers in this tournament, they took down the weaker challengers in group play and gave it all they could muster here. Unfortunately for them, their heavier, much harsher hoppy taste could not prevail over the smoothness of the United States entry, Killian's Irish Red (itself a relatively dark beer). Killian's won with ease and moved on as the third entry in the Semis.
Match 4: Jamaica's Red Stripe was an old, sentimental favorite but never a strong competitor. As with Stella Artois, it got into the Quarters mostly by being the least bad of a set of weak lager/pilsners. Heineken of the Netherlands proved to be one of the absolute best of the lighter-colored beers, with a smooth flavor and not too much of the strong hoppiness that had derailed so many others. The Dutch moved with ease into the Semifinals while the Reggae Beers sailed home.
And so the Semifinals will see all four of the Group winners facing off, while all of the 2nd place beers go home:
Australia (Foster's) vs.
England (Newcastle)
USA (Killian's) vs.
Netherlands (Heineken)
Posted by Van Allen Plexico at 7:25 PM