Space: 1999 How the First Season Could've Been Epic

One of the frustrating things about watching TV series that aired before, say, 1990 is that there was rarely much effort made by the show runners (or whatever they were called back then) or the writers to create much of a narrative thread that could link the episodes. 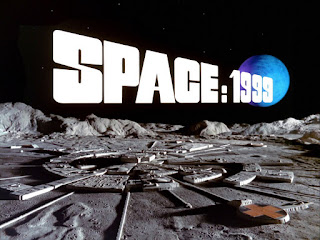 Sometimes there was a thematic linkage, such as the whole "fleeing the Cylon tyranny/searching for Earth" thread that ran through Battlestar Galactica (1978-79) or the "strange cosmic British beings are lording it over us but we're protected by the Mysterious Unknown Force" thread of the first season of Space: 1999.

But upon rewatching the first season of Space: 1999 in broadcast order (and I'm currently seven episodes in), the frustration is even greater, because the possibilities of what they could have done with the show are so obvious. It's a wonderful show (in the first season) but they could have made it so much better...but they largely ignored every opportunity and instead made each episode a stand-alone story that mostly ignored everything that had come before. Lessons learned in one episode are entirely forgotten a couple of episodes later, and threads that could have been picked up on and woven into more complex patterns are dropped entirely.

Case in point: Three episodes that together could have formed a truly fascinating storyline if they'd 1) been aired in the proper order, story development-wise, and 2) been slightly re-written to reflect lessons learned and opportunities presented in previous episodes. 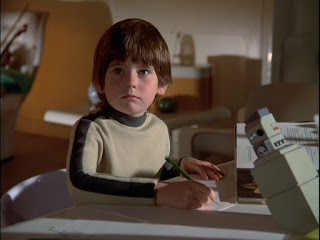 As the episodes aired originally, we had 102: Force of Life, in which one of the Alpha techs, Anton Zoref, is possessed by a being of light and compelled to try to break into the main reactor to siphon its energy. He has a loving girlfriend who tries to save him but fails. Then there was 104: War Games, in which aliens play out a dream in Commander Koenig's mind of the utter destruction that would result if the Alphans blindly attacked ships approaching the base, falling prey to their own baser instincts. And then came 107: Alpha Child, in which an Alphan woman gives birth to the first child born on the Moon, after the father (not Zoref) has died, and Koenig recklessly orders Alan Carter and his Eagle squadron to open fire on ships that have taken no directly hostile actions. The child ages extremely rapidly.

Now just rearrange those three episodes and slightly change the stories and you have something terrific: a "You Alphans need to grow up" story trilogy.

First, we would do the 102: Force of Life story. It goes pretty much as it aired--but in the final scene, we show Zoref's girlfriend discovering she is pregnant.  Next, several episodes later, we do the "Alpha Child" story, and the reason the child grows up so quickly ties into the energy being that possessed his late father, Anton Zoref. (The aliens who come to get him are connected to this story as well; I won't develop it further here, but I think the possibilities are obvious.)  And finally we'd have the "War Games" story, where those aliens have seen what happened with the previous story (reckless Koenig ordering futile military actions) and as a direct result of that, they do the "War Games" shtick that we saw in the original episode--and Koenig learns the lesson.

I'm sure there are more story points from season 1 that could also be drawn together, resulting in a truly epic first season of Space: 1999. But that's enough for now.

Leave your own thoughts about this in the comments, and be sure to check out my own stories below. 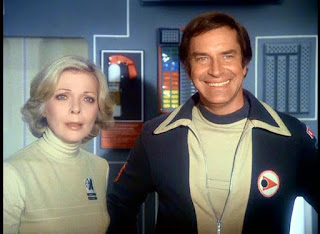 
Van Allen Plexico is an award-winning SF/adventure novelist and non-fiction writer and podcaster, as well as an associate professor of Political Science and History.
You can read Van's own interstellar saga of politics, religion and cosmic warfare in "The Shattering" from White Rocket Books, available here. The third volume of the Legion trilogy recently won Novel of the Yearin the 2015 Pulp Factory Awards.He's on Facebook as Van Allen Plexico. Follow him on Twitter:  @vanallenplexicoThe White Rocket Podcast and White Rocket TV can be accessed athttp://www.whiterocketbooks.com
Posted by Van Allen Plexico at 5:43 PM

I think Season/Series 1 was a Magnum Opus. Similar to a "concept" album, like "Sgt Pepper" or "The Wall."

In Dragon's Domain, Helena provides a time line for series of 877 days since leaving earth orbit. In Testament of Arkadia, Koenig provides the Epilogue for the season-- as the Mysterious Force has full-filled it desire to return Humanity to the planet of origin. Koenig reflects in epilogue style the entirety of Season/Series 1.

Breakaway was the hook, Matter of Life and Death foreshadowed what the episodes would be about, namely matters of life and death, which is how the opening title sequence flashes the episodes content. All other episodes show how the Alphans must grow beyond the petty politics and reliance upon technology that does not prepare human kind for venturing into the Cosmos. Only the Mysterious Force can do that effectively.

Season/Series 1 in effect was just such an epic--- just not as mundane as a typical "to be continued..." or with an obvious narration to spoon feed us.

I lived and breathed the first season of '1999' when it first aired. I was 15 at the time, and wanted to be a filmmaker. I read everything about the show I could find, and there was actually an article somewhere that addressed the storyline continuity issue directly. Because the 1st season would be filmed, unsold, in it's entirety a full year before it aired,(who would have the balls to take that risk today?)and the fact that it would be syndicated,each individual station airing the show should (in ITV's opinion) not have the burden of trying to adhere to a specific order, so it was a deliberate decision to make the episodes self contained, with the least amount of continuity. That would also increase rerun potential.(One could argue the 3rd season of 'Enterprise' bears this point out-not to mention why 'Dallas', 'Dynasty',etc, did so poorly in syndication.) As to the 2nd season....well, we won't even go there...let's just say Fry-burger should have made a career doing just that. BAD Lord Lew, BAD!!
PS:Did you know Gerry Anderson's first choices for Cmdr. Koenig & Dr. Russell were Robert Culp and Katherine Ross?