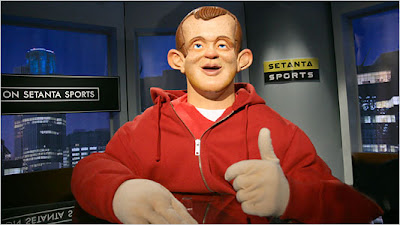 England is playing as well as it has since its semifinal run in 1990. With a combination of solid veterans (my Chelsea FC boys Terry, Cole and Lampard, plus Steven Gerard, Rio Ferdinand, and so on) and younger guys rounding into top form (particularly "the Boy," Wayne Rooney), the lineup is very strong, experienced and formidable.

Algeria is something of a mystery. By all rights, Egypt should have secured this African spot in the Cup. But a combination of events led to Algeria grabbing it. Capable of decent football on occasion-- such as when they face the US, given our luck!-- this is a team that should not be overlooked. But if all goes as expected, the Algerians should serve up 9 full points to their foes.

Slovenia is a sort of stealth team as well. Just as Algeria snatched away Egypt's spot, the Slovenes grabbed Russia's. (This group would be a lot scarier if it was England, USA, Egypt, Russia!!) A capable side of the mold of other historic Eastern European teams such as Romania and the Czech Republic, they pose a particular threat to the USA, which never does well against teams from that region. (Examples: Czechoslovakia 1990; Romania 1994; Yugoslavia 1998; Poland 2002; Czech Republic 2006-- all defeats for the US.)

This brings us to the USA. Two factors work in our favor this time around: 1. The USA tends to do well every other World Cup-- and 2006 was a bad one, so we're due. 2. The USA always does much better in Cups held outside of Europe. In fact, the USA has never won a game in a World Cup played in Europe. Meanwhile, in Cups played outside of Europe, we've made the Round of 16 and the Quarterfinals (1994 and 2002).

The main factor limiting the USA this time around is injuries. Charlie Davies, who provides desperately needed speed and scoring threats at the forward position, was injured in a car accident a few months ago and is out. Several other important players, particularly midfielder Clint Dempsey and defender Onyewu, MUST overcome their injuries and play well if the USA is to advance. Aside from that factor, the USA side is actually in pretty good shape, with a seasoned lineup of veteran players experienced in European club play as well as in an improving MLS. And they're the only team to take down mighty Spain in quite some time, in last year's remarkable Confederations Cup run.

Playing in that tourney, by the way, also allowed the US team to gain some experience playing in South Africa as well as playing in the same stadiums they'll be seeing this time around. That's a factor that should not be overlooked.

Predicting what will happen with injured players is never easy. Assuming they are able to perform to something like their capabilities, the USA has a chance to make the second round--which would be considered a success and which is about as far as we can hope for this bunch to advance.

In 2006 I predicted the USA would NOT advance out of its group-- a statement that was not very popular with my soccer friends. But I was right. I don't want sentiment to cloud my judgment, but this time I think we just might squeak through.... IF the injured guys can play to their potential. So I'll say:

USA advances on goal differential over Slovenia.
Posted by Van Allen Plexico at 7:03 AM

It *should* be a routine group for England, but the sheer weight of expectation and media hoopla that accompanies them almost always undermines what on paper is a reasonably strong squad. I'm not convinced by our attack, beyond Rooney - Crouch and Heskey are especially dodgy. Similarly, our goalies are not exactly inspiring.

I can't argue with your prediction - it should be England and the USA that go through, but you can never tell.

The first thing that concerns me is the complete lack of international experience at the forward position. Jozy Altidore, our best hope up top, leads all the forwards with a mere 25 caps.

The other three (Buddle, Findley and Gomez) each had less than five caps to their name going into Saturday (and had combined for a grand total of ONE goal for the US).

As go Clint Dempsey and Landon Donovan, so goes our World Cup.

It’s all about these two guys. If you want the US to have a successful Cup, you need to start pulling for these guys. They are our best playmakers, our most creative talents. They can score, they can distribute, they can create chances out of thin air with a single touch.

Over all, as I look over the roster, I see a lot of question marks and a lot of unproven international players. No experience up top, shaky play and frequent miscommunication in the back, and all our hopes seemingly riding on a pair of playmakers (with no options if one of them goes down).

But most distressing of all was Bradley’s approach to the game Saturday. He had the US in a 4-4-1-1 to start the game, with Dempsey roaming freely behind Altidore up top. Plus, he played a lot of people that hopefully won’t be called on very much during the Cup. I’m looking at you Spector, Goodson, and Clark.

I see inexperience, I see uncertainty in game planning, and I see trouble for Team USA. I’m not even sure I could name 11 players from this roster that I’d be comfortable starting.

Onyewu, Cherundolo and Bocanegra in the back. But I see no body we can have confidence in as a fourth defender.

Dempsey, Donovan, Bradley in midfield. With a very unproven Torres possibly to round that out.

Up top… Altidore… and… I dunno. Findlley showed a lot of speed and good touch against the Turks. But he plays for Real Salt Lake in the MLS. He hasn’t exactly faced competition like England’s Best Eleven.

Maybe you slide Dempsey up top and bring in Feilhaber or Beasely in midfield.